Even though the pandemic has altered our world, my husband Larry and I will still maintain many of our traditions this Chanukah. Eating potato pancakes with applesauce. Lighting candles each night. “Betting” on which candle lasts the longest. Watching Hallmark Christmas movies.

Wait! Hallmark Christmas movies? When did that become a tradition?

For as long as I can remember, I have watched Hallmark movies. For many years, the famous card company aired shows specific to the holidays—Thanksgiving, Christmas, and of course Valentine’s Day. Each two-hour made-for television episode touched my heart. Many were based on classic novels, such as The Secret Garden or Sarah Big and Tall. Others were originals, such as What the Deaf Man Heard. And as much as I loved the shows themselves, I especially enjoyed the tear-jerking commercials (Did you know you can Google them? Watch them with a box of Kleenex next to you!)

In 2001, after the major networks dropped the specials, the company launched The Hallmark Channel. Building on its many fans during the holidays, Countdown to Christmas began in 2009, a promotion of 24/7-blast of cheer that is still running today. Cookie-cutter stories, many based loosely on more expensive big screen movies, have been churned out at an amazingly fast rate, with 136 to date. That is a great deal of Deck the Halls and Jingle Bells, their favourite songs as the movies are touted to be about the spirit of the season, not religion.

Even though Larry and I watched the movies frequently over the years, what sent me over the edge was November 2016, when the election results triggered such fear and anxiety that my doctor put me on Xanax. Dr. Larry suggested an additional remedy: Turnoff MSNBC and tune into Hallmark. I was off the anxiety medication less than three months, but I still have my weekly dose of sap and sugar.

If you have watched only one or two of the productions, you have pretty much seen them all. The Christmas plot fall into two categories. Plot One: A high powered business dynamo needs to learn the real meaning of life and that he/she  can only find in a small idyllic town inhabited by incredibly cheerful people who despite their low-paying occupations (cupcake bakers, store clerks, and staff at huge inn with no guests in sight except the small cast seem to be a favourite) still can afford enough Christmas decorations to cover EPCOT. Plot Two: A poor but kind woman finds out that the incredibly handsome mystery man she is dating is actually the king of a tiny but wealthy country named after a countertop (Cambria) or china pattern (Winshire). Just before the commercial twenty minutes before the show ends, a conflict based on a misunderstanding erupts. No worries! It will be resolved with a kiss one minute before the snow starts and two minutes before the credits roll.

Up until this past year, Hallmark was all about white heterosexual Christians,. People of colour were only  seen as the best friend or the minister who marries the happy couple. Gays and lesbians were never seen. This type casting was blown out of the water last December when the channel first aired then immediately pulled an advertisement for an event planning site that featured two women kissing at the altar. Within hours of its removal, the incident was all over the news. Within days, the president resigned. Within weeks scriptwriters began churning out stories in which gay, lesbian, and interracial romances are highlighted.

What has been missing are stories about Jewish couples. Loving Leah (2009) was the closest to a true Jewish romance when a non-observant Jewish bachelor feels compelled to marry his rabbi brother’s widow, to honour him via the ancient Jewish law of yibbum (levirate marriage). The channel’s attempts at celebrating Chanukah however, have been for me, major fails. Holiday Date one of three 2019 seasonal movies, with a Jewish twist involved a Joel, a nice Yiddish boy who pretends to be the boyfriend of Brooke, a nice shiksa from an idyll small town in Pennsylvania. “Hilarity” ensues when Joel, who grew up in New York City surrounded by at least one or two Christians, has no idea how to decorate a tree or make a right-sided gingerbread house or sing Deck the Halls.(There is that song again!) My favourite moment is when, once the ruse is uncovered, Brooke’s mother comes out of the kitchen holding a tray full of potato latkes and wearing an “Oy Vey” apron that she managed to find on the first night of Chanukah in the town’s only store. The plots of the other two, both involving interfaith romances, made Holiday Date look like Casablanca.

So why do I—along with many others who will not come out of the closet—love the shows? Simple. They are mindless, sweet, non-political, non-violent, and always guarantee to result in a happy ending. I still cry every time King Maximillian and Allie embrace at the end of A Crown for Christmas.(Take that, you wicked Countess!) What held true for me in 2016 holds true in 2020. I need a break from COVID-19 and the elections and the transition. Grab the dreidel shaped sugar cookies and hot chocolate. It’s time for a Hallmark Christmas movie!

Marilyn Cohen Shapiro, a resident of Kissimmee, FL, is a regular contributor to the (Capital Region NY) Jewish World and the Orlando Heritage Florida Jewish News. She is the author of two compilation of her stories, There Goes My Heart (2016) and Tikkun Olam: Stories of Repairing an Unkind World. (2018). Both books available in paperback and e-book format on Amazon. You can read more of her stories on her blog, theregoesmyheart.me. 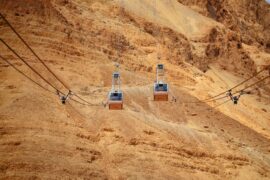 What happened to Irene Fogel Weiss