It’s been two and a half years since my husband died suddenly. In that time I thought I’d seen and heard it all.

I’ve been comforted by literally hundreds of people, spent time mourning my husband with his family, friends, colleagues and patients, listened to beautiful words of encouragement and the occasional way off-base comment.

I’ve been asked probably thousands of times “are you okay?” by well-meaning friends and colleagues who with kindness and compassion check in regularly and are there for me in whatever way I need.

And then, last week, someone asked me a question which I had never been asked before. Someone I’d only recently met, who didn’t really know me and knew only the bones of what had happened. He asked: “How’s your heart?”

The question floored me. My response floored me more. I felt this intense pain. Immediate. Like it had all just happened yesterday. All of a sudden I was vulnerable again. The scab had been ripped off. This one seemingly simple question forced me to really consider how I’m actually going.

At first I avoided answering the question. If distraction has been the number one strategy I’ve used to deal with grief, then avoidance is a close second. But he was having none of that.

And so I had to answer, but first I needed to ask the question of myself. I stopped my car, pulled over to the side of the road and took a moment to think…. How is my heart?

Mostly I am genuinely okay. I am grateful every day for the fact that my children and I are surrounded, cocooned almost, in the tight grip of family and community. I have friends who have come and kept me company in the evenings every week since my husband died. Ive barely spent a Saturday night at home on my own and on those nights when I am home alone I know I could pick up the phone and someone would be at the other end to listen at whatever time of the day. I am financially literate and have managed to learn how to live as an independent adult for the first time in my life. I’ve also learned how to kill big spiders and use a screwdriver. I am okay.

But in between the love of my children and the intellectual stimulation of my job and all the other things that I have to be grateful for, my heart is still broken and possibly always will be. There has not yet been a day when I don’t think of my husband, and there may never be. The glue that holds my heart together hasn’t dried, it may always feel tacky to touch. That’s what facing the question showed me.

I’ve spent the last two and a half years trying new things, meeting new people, going against my natural personality and deliberately trying to force my heart to stay open to new possibilities. Its that attitude which led me to meeting the questioner, a person I would likely never have met had I stayed in the same place trying to hold my heart together on my own. Full circle.

If you see a friend hurting… if you are the person hurting… I urge you with both your questions and your responses… go deep.

(This article was first published by Mamamia)

Fiona Grinwald is the founder of 2lookup, a platform of positive shared connection seeking to help people navigate through the often overwhelming sense of negativity that exists right now. To learn more about 2lookup, find them on Facebook or on Instagram as @2lookup, or via www.2lookup.com.au 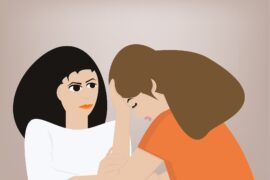 My Daughter is my Teacher